Ever since GDP Growth rate for Q1 of FY18 was announced on 1st September, 2017 there is nonstop discourse on the bad shape of Indian economy. Call it discourse or whining, everyone has an opinion on this. P. Chidambaram tweeted: “Our worst fears have come true. Sub-6% growth is a catastrophe. The slide in economy continues. Slow growth, low investment and no jobs. An explosive cocktail.” People who have to be taken seriously – Yashwanth Sinha, Subramanian Swamy, Gurumurthy – have complaints of varying degrees. Subramanian Swamy says economy is in tailspin and says according to “Samuelson-Swamy” theory one needs to search growth. Gurumurthy says GST, DeMo, NPA, etc are the problems and economy is slipping. 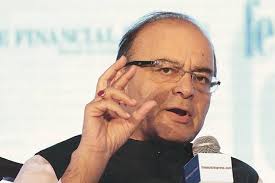 The protagonist, Arun Jaitley says, “It throws up a challenge for the economy. In coming quarters we require—both in terms of policy and investments—to work more to improve upon this figure”. Chief Economists of banks, Arundhadhi Bhattacharya and may people who are ought to be taken seriously are of the opinion this points towards a fundamental loss of momentum and cannot be viewed as transitory slow down due to disruptions.

Given this scenario, GDP Growth or lack of it became a rallying point for disgruntled intelligentsia and middle class. Disgruntled due to lack of visibility in DeMo, GST implementation fiasco etc, GDP Growth rate is an armour for Modi bashing. Facebook and Whatsapp gyan providers are having a field day. For a change, bhakths are in the back foot. Not to be out done everyone I know of – friends, acquaintances, clients, my uncle who was dead and gone before Modi came to power – are worried about Indian economy and GDP growth rate.

All through this, there is no one who has anything constructive to offer. How to reverse the trend, if at all? That’s Arun Jaitley’s problem and Modi’s waterloo. Everyone is unanimous about one thing. Multiple disruptions of headstrong Modi Government have put the country backwards, though we don’t care how to take it forward! Let’s have a saner approach and look at it holistically. First the disruptions.

All told, DeMo is not a great success, as on date. Unless the government collects at least Rs.1,00,000 crores in taxes from spurious deposits, it can be termed as utter failure. If it fails, it would be a poor way to repay the faith reposed by masses on Modi and the sufferings they have undergone for a better India.

One wonders why the DeMo implementation is that terribly botched up. Is corrupt Babus implementing schemes for clean governance is the reason? Modi government needs to introspect. All told, there is definitive impact in GDP Growth rate due to demonetisation, largely due to the sufferings of SME sector.

Afterword: I wrote this far and left it to be continued later. Times Now today came out with an exposé. Single company has 2000+ bank account opened by Bank of Baroda and exchanged Rs.4500+ Cr during DeMo period. 200000 shell companies were closed. Once banks provide more data, tax collection may well be over Rs.1,00,000 Crs. But it will take years to do that.

Implementation apart, there are a few real problems especially for SMEs.

All these have natural impact on GDP growth. 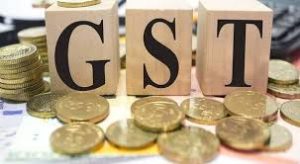 Despite all these, GST will have beneficial impact on the economy in the long run. Tax rates will eventually converge to 12% and 18%. Black money generation through business will be largely reduced. Economic buoyancy and tax collection will improve.

Today, some positive steps are taken in the right direction and much needed time is given for proper transition. GST Council is a truly federal body. They are equipped take decision and virtually every decision is on consensus. They even write their own law. Erstwhile planning commission or even NITI Aayog are Centre driven bodies and they are not truly federal. This is one important takeaway of GST. We have become a truly federal republic.

Some of the positive steps undertaken by GST Council today (6th October’2017).

All told, these are good steps that will help trade and industry. Much needed, though it must have been done as a reaction to 5.7% GDP growth rate. In sum and substance, GST is not likely to be an impediment for the country’s growth. In fact, it will fuel growth

The SME Predicament and NPA issues

SMEs are proverbial backbones of Indian economy. DeMo and GST has made huge impact on this sector that has been great generators of employment. They need finance. Stung by NPA, banks are not willing to lend. CGTMSE Scheme (Collateral free loan for MSME up to Rs.100 lakhs) is just on paper. During the period of demonetisation, we made another blog post which is available here. We were hoping government will take some actions in the following lines.

Nine months after demonetisation, not even lip service is being given. SME predicament has definitely affected GDP growth.

Big industry credit off take is also pathetic. NPA stung Bank Managers are concerned with CVC, CBI and their own 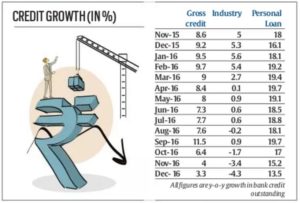 pension. With the result, banks are not taking decisions to take haircuts on NPA and move on. They want to fund only companies with credit rating of A+ and these companies are not investing. Those who need loans are not getting because they are not A+. This has resulted in poor credit off take and fillip to growth. One of our clients is a BBB- NBFC who lends to SME and provide Gold loans. They are finding it difficult to raise funds purely on rating count.

Is our economy on a tailspin?

Despite all these problems, we don’t believe, our economy is in ICU. 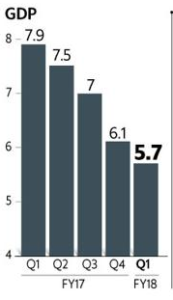 Most other agencies have given similar ratings. Suffice it is to say, world expects a GDP growth of 7% for FY18 for India despite 5.7% growth in the first quarter. Funny, not many stopped to think what it means. What it really means is the country has to grow at an average of little over 7.4% for the balance three quarters. If we place this in arithmetic progression GDP growth rate will be 6.6% in Q2, 7.4% in Q3 and 8.2% in Q4. Does it sound anywhere like an economy in death bed?

I asked a friend of mine who works in a senior position for a piston manufacturer whether their production has come down. He said, they have huge backlog of orders. Auto is a bell weather industry and Maruti grew over 10% in September 2017, compared to September 2016. Similar figures for July was 20.6% and August was 23.8% Not just Maruti, entire industry grew. However, manufacturing SMEs need some serious help. DeMo and GST have put them in the backfoot. Serious remedies are being done with respect to GST. Funding aspect needs to be alleviated. However, Indian SME, like our society, is very resilient. That’s why you see every SME in your neighbourhood flourishing.

Outlook of manufacturing is positive and agriculture is likely to buoyant. ADB, in the same report observed, “Despite the short-term hiccups as firms adapt to the national GST, we believe that continued reform progress will help India remain one of the world’s most dynamic emerging economies. It further observed, “Investment growth, however, is likely to remain muted in 2017-18 as budgetary constraints limit government expenditure. Growth will further pick up in 2018-19 as the new tax regime improves domestic competitiveness and government efforts to improve health of the banking sector aid private investment to yield results.”.

That’s it, really. DeMo is not the kind of failure, world is perceiving it to be. It will indeed collect huge amount of taxes in the foreseeable future, if not in the near future. Process for settling down with GST has firmly begun. This will increase tax collection. Agriculture is likely to provide huge bonanza. These are definite pluses.

NDA Government has already crossed 92% of its budgetary deficit for FY18. This means they have already front

ended all planned investments. There is no further scope for additional investment. And credit off take is bad. SMEs require more help. Since income growth is not exponential, the government should curtail unplanned expenditure.  Banks should be empowered to take haircuts and move on. We can find money for all these. Our debt profile is pretty good at 71% of GDP. Sovereign rating worry might prevent the government from doing this.

In sum and substance, we don’t believe GDP growth is in ICU. We are stronger than that and we are likely to grow much faster than this.

We would love your comments and interactions.